More Than 100 Slayings in Syria Camp Since January 2021, UN Says 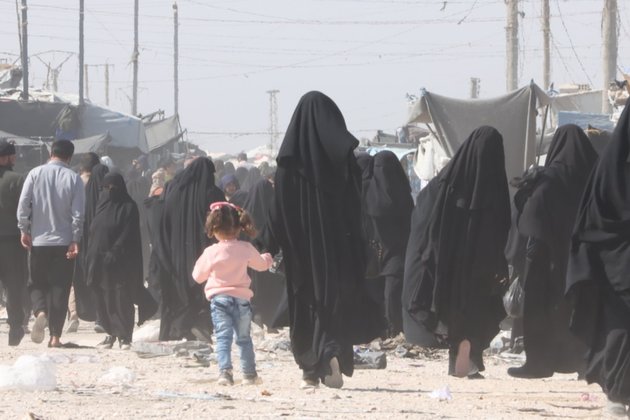 Geneva, Switzerland - More than 100 people, including many women, have been murdered in a Syrian camp in just 18 months, the United Nations said Tuesday, demanding countries repatriate their citizens.

The Al-Hol camp is increasingly unsafe, and the child detainees are being condemned to a life with no future, said Imran Riza, U.N. resident coordinator for Syria.

Al-Hol, in the Kurdish-controlled northeast, was meant to be a temporary detention facility.

However, it still holds about 56,000 people, mostly Syrians and Iraqis, some of whom maintain links with the Islamic State jihadist group, which seized swaths of Iraq and Syria in 2014.

The rest are citizens of other countries, including children and other relatives of IS fighters.

Some 94% of the detainees are women and children, Riza, who has visited Al-Hol a handful of times, told reporters in Geneva.

'It's a very harsh place, and it's become an increasingly unsafe place,' he said.

There have been 'around 106 murders since January last year in the camp,' and 'many' of the victims were women, he added. 'There's a great deal of gender-based violence. ... There's a lot of no-go areas.'

Thousands of children from all over the world remain detained in al-Hol Camp, despite repeated calls for countries to repatriate their nationals on Oct. 20, 2021 in al-Hol, Syria. (Ali Zeyno/VOA)

The U.K.-based Syrian Observatory for Human Rights said violence was spiking in the camp, with another murder Tuesday - the seventh since June 11.

Out of 24 people murdered inside the camp this year, 16 were women, the Observatory added.

While there have been some repatriations to Iraq, many other countries which 'need to be accepting their people back' were refusing to do so.

'The majority of the population there are children. They are innocent. If you leave them in a place like Al-Hol, you're essentially condemning them to not having a future,' Riza said.

Riza said that when boys turn 12, 13 and 14 years old, they are taken away from their families and placed in a different center, where their future is one of radicalization and joining a militia.

'The only solution is emptying the camp,' he said.

It quickly spiraled into a complex conflict that pulled in numerous actors, including jihadist groups and foreign powers. The war has left around half a million people dead and has displaced millions.

Riza said the levels of need in Syria were unprecedented and increasing, with 14.6 million people requiring humanitarian assistance - up 1.2 million since 2021 - and the highest since the civil war began.

Riza said the country was facing a 'cascade of crises,' with the key factor now the economic decline dragging down socioeconomic conditions.

'The impact on Syrians is devastating, and families are increasingly pushed into destitution,' he said.

More than 90% of the Syrian population is estimated to live below the poverty line.