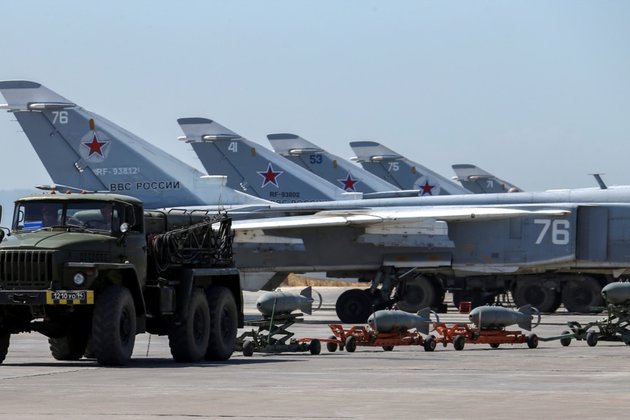 Istanbul - Ankara is increasing pressure on Russia's military presence in Syria with its decision to close its airspace until July to Russian civilian and military planes carrying troops to Syria.

Ankara gave no official reason for the move. While Ankara and Moscow back rival sides in the Syrian civil war, they have been cooperating in resolving the conflict.

Huseyin Bagci, head of the Turkish Foreign Policy Institute in Ankara, said the action comes as Turkey's shared opposition with its western allies towards Russia's invasion of Ukraine is the basis for Ankara to repair its strained relations with Washington and its NATO partners.

'It's an important decision. Turkish-American relations improved dramatically in this respect. Probably the Americans bilaterally and NATO as an institution insisted upon it. Trying to close the increasing influence of Russia in Syria and in the Middle East in general. It's, of course, not a decision the Russians would like to see,' Bagci said.

Turkish airspace offers the easiest route for Russian planes supplying its military bases in Syria, although there are alternatives. But, said Zaur Gasimov, a Russian expert at Bonn University, the closure of Turkish airspace will stoke fears in Moscow that Ankara is cooperating with Washington to cut off Russian supply routes to Syria.

'To maintain the airbase in Syria, of course, they fly over the Turkish airspace ... . Still, Russia can use the airspace of Iraq and of Iran to reach their military bases in Syria,' Gasimov said. 'It's possible that Washington urges pressure on Baghdad to close its airspace.'

Russia's supplying of its military forces in Syria is already complicated by Ankara's decision to limit the use of Turkish waters by Russian warships based in the Black Sea under the international Montreux Convention. The convention allows Turkey to impose restrictions if a war occurs among Black Sea countries. 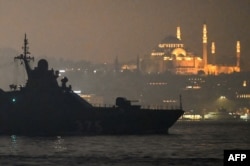 FILE - The Russian Navy's Project 22160 Patrol Vessel Dmitriy Rogachev 375 sails through the Bosphorus Strait on the way to the Black Sea past the city of Istanbul, Feb. 16, 2022.

'Russia was using the Turkish straits to supply its campaign in Syria, and we used to see multiple ships in a week ... ,' Isik said. 'And now all those ships disappear. Only two ships pass in the entire last month. And we are talking about usually four or five ships were passing per week.'

Analysts note Moscow retains powerful leverage over Ankara, with Turkey heavily dependent on Russian energy. And any assault by Russian forces on Syrian rebels holed up on the Turkish border could trigger an exodus of refugees into Turkey.

'The room for Russian maneuvering vis-a-vis Ankara got very limited. Turkey is one of the countries which still didn't join the anti-Russian sanctions,' Gasimov said. 'It's very important for Moscow to maintain the dialogue with those countries and not to augment the ranks and numbers of countries who join the sanctions.'

Moscow has refrained from publicly criticizing Ankara, with Kremlin spokesman Dimitri Peskov last month describing Turkish-Russian relations as excellent. However, analysts point out Moscow's increasing international isolation is providing Ankara with a rare opportunity to turn the tables on Moscow in a relationship traditionally tilted in Russia's favor.