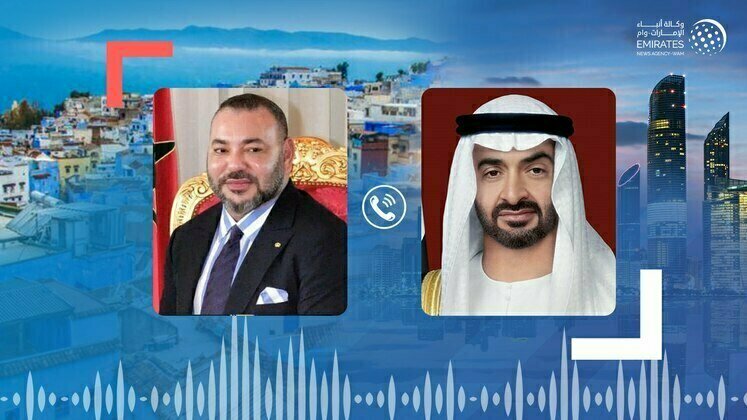 ABU DHABI, 17th January, 2022 (WAM) -- His Highness Sheikh Mohamed bin Zayed Al Nahyan, Crown Prince of Abu Dhabi and Deputy Supreme Commander of the UAE Armed Forces, received today a phone call from His Majesty King Mohammed VI, King of the sisterly Kingdom of Morocco, who condemned the heinous attack by the Houthi militia on facilities and civil areas in the UAE, which resulted in a number of fatalities and injuries, expressing his sincere condolences over the victims of the attack and wishing a speedy recovery to the injured.

King Mohammed VI reiterated the Kingdom of Morocco's firm support for all the steps taken by the United Arab Emirates in the face of the despicable attacks of the Houthi militia and those behind them.

His Majesty affirmed the Kingdom's permanent support for the UAE in the face of all threats to its security.

His Highness Sheikh Mohamed expressed his thanks and appreciation for the sincere brotherly feelings expressed by His Majesty towards the UAE and its people, asking God Almighty to protect Morocco and its people from all evils.