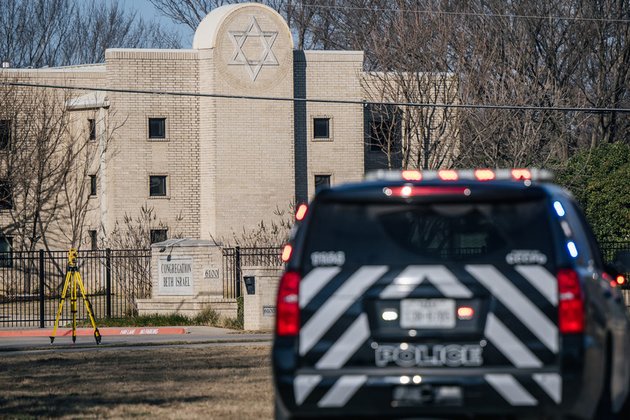 The gunman who held four people hostage in Colleyville had demanded freedom for a Pakistani prisoner dubbed ?Lady Al-Qaeda?

President Joe Biden said Saturday's hostage situation at a Texas synogoguewas an "act of terror." He added they were still learning about the now-deceased suspect's motives.

The president made his comments while at an event commemorating Martin Luther King Jr. Day on Sunday.

The president said he has been briefed on the situation by Attorney General Merrick Garland and they are working to address "these types of acts." He added that he has spoken to the rabbi who was among the captives.

"The idea of background checks are critical, but you can't stop something like this if someone's on the streets buying something from somebody else on the streets," he said, alleging it had been too easy for the suspect to arm himself.

Four people were held hostage on Saturday at a synagogue in Colleyville, Texas by a man who later died during a police raid of the building after hours of negotiations. None of the hostages, one of whom had earlier been released by the gunman, were apparently hurt.

The negotiations could be partially heard by worshipers at home via the Facebook livestream of the service that had been underway when the hostage situation began. The suspect could reportedly be heard threatening the hostages, and referencing both Islam and a woman he referred to as his "sister."

Multiple media outlets have suggested the suspect was the brother of Aafia Siddiqui, a Pakistani neuroscientist currently serving an 86-year prison sentence in the US having been charged with attempting to murder US military personnel. Siddiqui's brother's attorney denied his client had been the gunman, while Siddiqui's own lawyer said she "condemned" the suspect's actions.

There have been growing calls for Siddiqui's release in both the US and abroad, with supporters labeling her an innocent victim of the War on Terror. The Pakistani government even passed a resolution in 2018 according her the title "Daughter of the Nation." In the US media, however, the woman was dubbed "Lady Al-Qaeda" after her arrest and eventual conviction in 2010.