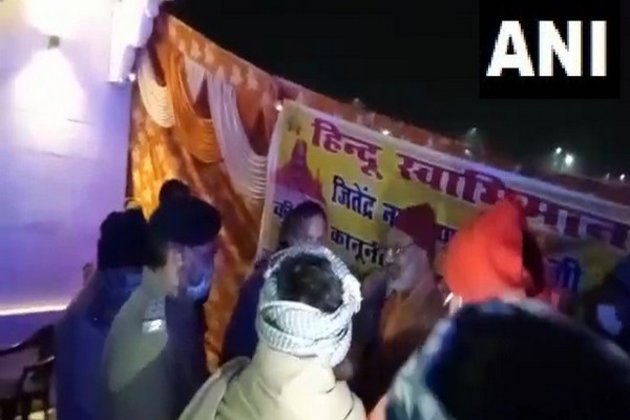 Haridwar (Uttarakhand) [India], January 16 (ANI): A Haridwar court on Sunday sent religious leader Yeti Narsinganand to 14-day judicial custody after he was arrested by Haridwar police for allegedly making inflammatory remarks at a Dharma Sansad in the city in a hate speech case.

The Nagar Kotwali police arrested Mahamandaleshwar Yeti Narsimhanand Maharaj of Juna Akhara from Sarvanand Ghat in Haridwar where he was reportedly fasting at Sarbananda Ghat demanding the release of Wasim Rizvi, former chairman of the Uttar Pradesh Central Shia Waqf board who was earlier arrested in this same case.

Altogether there are three cases registered against Swami Yeti Narsimhanand in Haridwar Kotwali. He has also been sued for making indecent remarks on women.

On Thursday, Wasim Rizvi alias Jitendra Narayan Tyagi was also arrested and sent to jail. Yeti Narsinganand was reportedly fasting at Sarbananda Ghat demanding the release of Wasim Rizvi. A protest meeting was also called by the seers at the Ghat on Friday.

Religious leader Yeti Narsinganand apparently called for the genocide and use of arms against Muslims while speaking at an event in Haridwar from December 17 to 19, 2021. An FIR was also registered against him along with many others in the case.

The Supreme Court on Wednesday issued notice to Uttarakhand and Delhi Police on a petition seeking an independent enquiry into the Haridwar Dharam Sansad speeches allegedly inciting violence against minorities. (ANI)