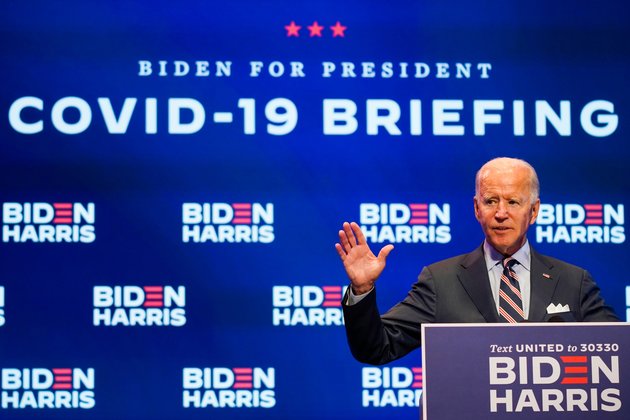 WILMINGTON, DELAWARE - Democratic Party presidential candidate Joe Biden on Wednesday called for an outside board of scientists, not President Donald Trump, to determine whether any vaccine for the coronavirus is safe and effective.

"I trust vaccines. I trust scientists. But I don't trust Donald Trump. And at this moment, the American people can't either," the former vice president said in Wilmington, Delaware.

Speaking in a downtown theater to a group of journalists, Biden introduced his own vaccine distribution plan, which outlines when Americans should expect to get a vaccine once it is available, offers guidelines for who should have priority for vaccination, explains mechanisms for shipping and storing the vaccine, and details responsibility in the process at every level of government.

"Scientific breakthroughs don't care about calendars any more than the virus does," Biden said. "They certainly don't adhere to election cycles. And their timing, their approval and the distribution should never, ever be distorted by political considerations."

Biden made his comment hours after the U.S. Department of Health and Human Services and Department of Defense released the Trump administration's strategy to deliver COVID-19 vaccine doses to the American people.

The Centers for Disease Control and Prevention has executed an existing contract option with McKesson Corp. to support vaccine distribution, which would occur following approval from the Food and Drug Administration, CDC Director Robert Redfield said Wednesday.

"As part of Operation Warp Speed, we have been laying the groundwork for months to distribute and administer a safe and effective COVID-19 vaccine as soon as it meets FDA's gold standard," said Health and Human Services Secretary Alex Azar. "This in-depth, round-the-clock planning work with our state and local partners, and trusted community organizations, especially through [the] CDC, will ensure that Americans can receive a safe and effective vaccine in record time."

In an ABC News televised town hall in Philadelphia on Tuesday, Trump suggested a vaccine could be three to four weeks away.

Redfield, however, told U.S. senators Wednesday that a vaccine could be generally available to the American public in the second or third quarter of next year, with those most at risk, such as the elderly and those with preexisting health conditions, along with health care workers, to be prioritized for vaccination.

UN Chief: COVID-19 Pandemic 'Out of Control' Antonio Guterres says the coronavirus is the chief global security threat in the world today, and he is calling for a future vaccine that's affordable and available to all

At the Philadelphia event, Trump suggested that "a herd mentality" could make the coronavirus disappear without a vaccine.

That was an apparent reference to herd immunity, which is the theory that a virus can be eradicated after a high percentage of the population is infected, thus limiting its ability to spread.

On Wednesday, White House chief of staff Mark Meadows told reporters that herd immunity has "never been a strategy" of the Trump administration.

"I will say that there are a number of individuals that would indicate that herd immunity - once we get the antibodies - and you're already in ways, I believe, seeing that in New York City, because you have a lower contagion rate, because they experienced such a high," Meadows said. "But they lost so many lives, and so, that is not something that the White House chose to employ."

Meadows also noted "there are a number of people out there that believe that ultimately this doesn't get solved until we reach that herd immunity population. Even some of the more renowned doctors have suggested that could possibly be, indeed, the answer."

U.S. polls show the rapid tests of would-be vaccines on thousands of volunteers that are being conducted in several countries have left many Americans skeptical of whether any approved preventative will be safe.

Health officials say that to protect the United States from the coronavirus, about 70% either need to be vaccinated or have antibodies against the disease.

An estimated 196,000 Americans have died from the coronavirus, with another 6.6 million infected, according to Johns Hopkins University, which is tracking cases around the world. Both figures are the highest for any nation.