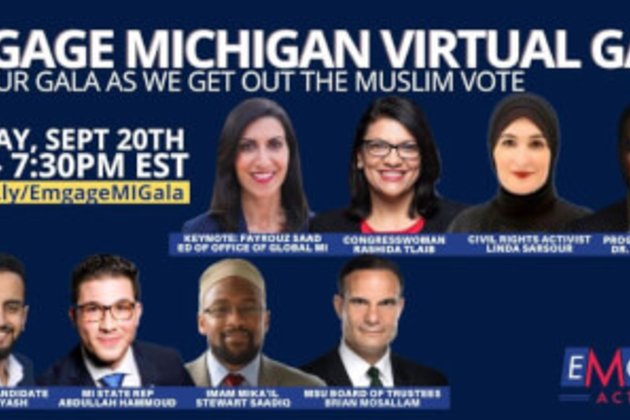 We will be discussing the achievements of the previous year, as well as new goals and strategies for empowering our communities and mobilzing our voices. We will also be recognizing the efforts and achievements of distinguished groups and individuals who have made a difference in our community, and continue to uplift our role in the fabric of this country.

"The Muslim vote is more critical than ever in the upcoming elections. This gala is intended to galvanize Muslim Americans to get out their vote so that our voices are heard and represented as we elect a leader for this country." - Nada Al Hanooti, Executive Director of Emgage Michigan

Emgage is a 501c(3) with national headquarters in Washington, D.C., and state chapters in Michigan, Texas, Florida, Pennsylvania, Virginia, and New York, that implements an ecosystem of programs to develop the capacity of the Muslim voter to ensure that our narrative is part of the American fabric. Our programs include civic educational events such as issue forums and town halls, voter initiatives including Get Out The Vote (GOTV), and specific programs for the youth in order to mentor and support the next generation of leaders.

Ray Hanania is an award winning political and humor columnist who analyzes American and Middle East politics, and life in general. He is an author of several books.

Hanania covered Chicago Politics and Chicago City Hall from 1976 through 1992 at the Daily Southtown and the Chicago Sun-Times. He began writing in 1975 publishing The Middle Eastern Voice newspaper in Chicago (1975-1977). He later published "The National Arab American Times" newspaper (2004-2007).

Hanania writes weekly columns on Middle East and American Arab issues as Special US Correspondent for the Arab News ArabNews.com, at TheArabDailyNews.com, and at SuburbanChicagoland.com. He has published weekly columns in the Jerusalem Post newspaper, YNetNews.com, Newsday, the Orlando Sentinel, Houston Chronical, and Arlington Heights Daily Herald.

Hanania is the recipient of four (4) Chicago Headline Club "Peter Lisagor Awards" for Column writing. In November 2006, he was named "Best Ethnic American Columnist" by the New American Media. In 2009, Hanania received the prestigious Sigma Delta Chi Award for Writing from the Society of Professional Journalists. He is the recipient of the MT Mehdi Courage in Journalism Award. He was honored for his writing skills with two (2) Chicago Stick-o-Type awards from the Chicago Newspaper Guild. In 1990, Hanania was nominated by the Chicago Sun-Times editors for a Pulitzer Prize for his four-part series on the Palestinian Intifada.

His writings have also been honored by two national Awards from ADC for his writing, and from the National Arab American Journalists Association.

Hanania is the US Special Correspondent for the Arab News Newspaper, covering Middle East and Arab American issues. He writes for the Southwest News newspaper group writing on mainstream American issues.