Majlis Podcast: How Do The Belarus Protests Resonate In Central Asia? 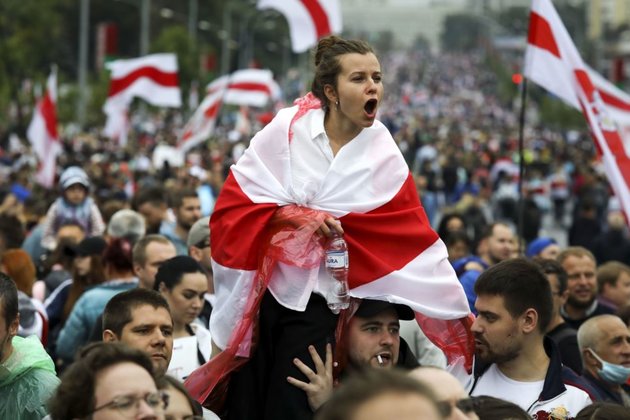 For weeks, people in Belarus have been protesting against the results of that country's August 9 presidential election that saw longtime incumbent leader Alyanksandr Lukashenka claim an overwhelming victory that few of his countrymen believed was true.

Lukashenka has been in power for some 26 years and many citizens of Belarus seem to think that is more than enough, and that for the country to move forward, there must be new leadership.

Long terms in office and little hope for significant positive change are things many people in Central Asia can identify with. Islam Karimov was independent Uzbekistan's leader for 25 years, Nursultan Nazarbaev was independent Kazakhstan's president for nearly 28 years, though more than a few people think he is still leading despite no longer officially being president, and Emomali Rahmon, who is running for a fifth term as president on October 11, has been Tajikistan's leader for nearly 28 years.

So how is Central Asia, where all the countries are members of the Commonwealth of Independent States, reacting to what is happening in fellow CIS member state Belarus and might those events have some influence on Central Asian politics?

On this week's Majlis podcast, RFE/RL's media-relations manager for South and Central Asia, Muhammad Tahir, moderates a discussion that looks at how much the protests in Belarus resonate in Central Asia.

This week's guests are, speaking from Washington, Erica Marat, associate professor at the National Defense University and author of the recently published book The Politics of Police Reform: Society Against The State In Post-Soviet Countries; from Moscow, Temur Umarov, a consultant at the Carnegie Moscow Center; from Prague, Tohir Safarov, a multimedia producer with RFE/RL's Tajik Service, known locally as Ozodi; and Bruce Pannier, the author of the Qishloq Ovozi blog.

Listen to the podcast above or subscribe to the Majlis on iTunes or on Google Podcasts.