US Renews Call for Gulf Countries to Resolve Rift 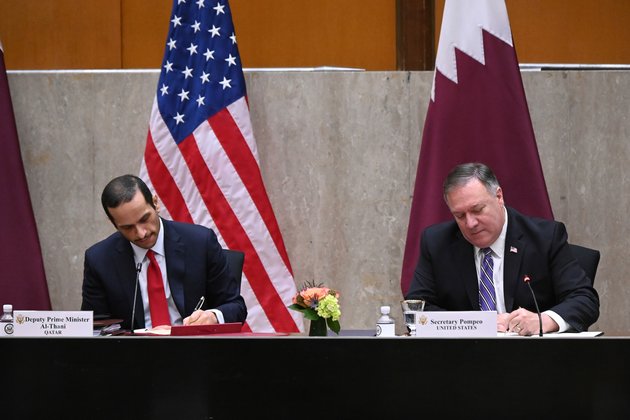 WASHINGTON - The United States is renewing its call for Gulf countries to resolve a three year-long rift, citing the need to solidify a united front against Iran.

"To close the door to increased Iranian meddling, it's past time to find a solution to the Gulf rift," U.S. Secretary of State Mike Pompeo said Monday. "The Trump administration is eager to see this dispute resolved and to reopen Qatar's air and land borders currently blocked by other Gulf states. I look forward to progress on this issue."

The secretary of state was joined by Treasury Secretary Steven Mnuchin and Commerce Secretary Wilbur Ross. The U.S. signed agreements with Qatar to enhance investment and cultural ties.

The UAE, Saudi Arabia, Bahrain and Egypt cut diplomatic ties with Qatar and imposed a boycott, accusing it of supporting terrorism. Qatar has denied the allegations.

The boycotting nations set 13 demands, among them were ultimatums that Qatar shut down its Al Jazeera news network, cut ties with Islamist groups like the Muslim Brotherhood, limit its links to Iran and expel Turkish troops from its territory.

Kuwait and the U.S. have tried to mediate the quarrel that's seen as undermining Washington's efforts to unify the region against Iran, which is seen as competing for regional supremacy with Saudi Arabia.

"I would like to thank the U.S. for supporting the Kuwaiti mediation to resolve the blockade on the basis of the respecter for the sovereignty and independence of the State of Qatar," said Qatari Deputy Prime Minister Al Thani.

U.S. Assistant Secretary of State for Near Eastern Affairs David Schenker said last week there has been a great deal of "high level engagement" and "White House involvement" in resolving the three-year-long rift between Gulf Arab states.

"There is a recognition that this is a distraction from Iran," said Schenker during a virtual event hosted by the Washington-based Brookings Institution on September 9.

Schenker said the U.S. has been working with partners in GCC.

"We're hoping that we see a little bit more flexibility here. I don't want to get into the whole diplomacy in it but there, there is some movement. I would like to say that it's going to be a matter of weeks," he said.

The White House is hosting a ceremony Tuesday, where the UAE and Israel are signing the so-called Abraham Accord to normalize diplomatic ties.

"As Israel and the UAE join President (Donald) Trump at the White House to sign a historic agreement to normalize relations, we anticipate other countries in the Middle East will recognize the benefits of a closer relationship with Israel. In that effort, also, Qatar plays an invaluable role in helping stabilize Gaza, as well as regional efforts to de-escalate tensions both in Syria and in Lebanon," Pompeo said Monday.

Experts say the United States is expected to ask Qatar to normalize diplomatic ties with Israel.

"I do not envision the GCC conflict resolved soon, but I don't think that conflict prevents Israel from normalizing ties with both Bahrain and Qatar," Daniel Serwer, the Middle East Institute's scholar and professor, said on Monday.