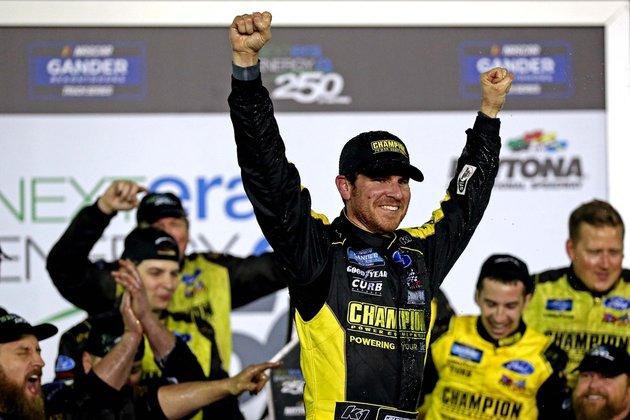 Enfinger got his shot at the win after a massive wreck on Lap 98 of a scheduled 100 took out his ThorSport Racing teammate, Ben Rhodes, and a baker's dozen of other contenders. Enfinger had the lead for a restart on Lap 105, but on the final circuit, Anderson made a move to the outside and briefly took the top spot as the drivers sped into the tri-oval.

But Enfinger turned the wheel of his No. 98 Ford to the right, door-slamming Anderson's No. 3 Chevrolet and breaking his momentum just enough to get to the finish line with 2 feet to spare. Codie Rohrbaugh charged into third place, .070 seconds back, followed by rookie Derek Kraus and Natalie Decker, whose fifth-place finish was the highest ever by a female driver in the Truck Series.

"It's an unbelievable feeling," said Enfinger, who broke a 28-race winless streak in the series. "It's the 100th win for Ford in the series -- unbelievable for them. God's blessed us with a great opportunity to come out here and pull it off tonight.

"The biggest thing is we had a really good F-150 to do it with. I made a mistake there with about 20 to go and got hung up there in the sucker hole. I pulled up in front of Ben too late, and it was either going to wreck me or put me in the middle, and that's what happened.

"It got to be about four or five laps to go, and it was time to go. We were able to get up in the third groove and make some stuff happen and get the lead during that last big wreck."

Enfinger, who led a race-high 41 laps, won both the second stage and the race, but it was Anderson who was perhaps most elated by his runner-up finish -- the first top five of his 102-race Gander Trucks career. Anderson could barely contain his excitement as he watched the replay on pit road.

"Grant, Grant, what are you doing door-slamming me, man?" Anderson said with a laugh as the video rolled. "I came here in 2015 and emptied my bank account to try to come down here and run. To be in a position to even go for a win at Daytona, man, I'm a kid that just wanted to go racing from South Carolina ...

"I thought we set him up good. We tried to follow Ross (Chastain) there and push him. I know he got loose, and I got up on Grant's bumper there in (Turn) 4 and got a good run. It was like NASCAR Thunder 2003 all over again. I'm like, 'God, I can do this!' And I pushed him out of the way, and I thought we had it."

With five laps left in the first stage, contact from Todd Gilliland's Ford sent the Tate Fogleman's Chevrolet sliding out of control as the field entered Turn 1. Fogleman's Silverado slammed into the Chevrolet of Austin Wayne Self, collecting the No. 45 of Ty Majeski in the process.

Majeski's Chevrolet tipped over, with help from Fogleman, and the truck slid on its roof through Turn 1, the contact between the sheet metal and asphalt sending a shower of sparks along its path. NASCAR red-flagged the race while the emergency crew righted the truck, enabling Majeski to climb out.

"It's just unfortunate," Majeski said after exiting the infield care center. "It's just a product of this (superspeedway) racing. ... It wasn't a good feeling (hanging upside down). I'm not hurt, thankfully, just my pride. It's all good. We'll live to race another day and go get 'em next weekend."

CAMBRIDGE, UK - Scientists at the Massachusetts Institute of Technology (MIT), along with others, have discovered an Earth-sized "Pi Planet" ...

CAIRO, Egypt - A Sydney man is imprisoned in a maximum security prison in Tora, Egypt for liking a Facebook ...

TEHRAN, Iran - The Iranian government has called on the international community to come together and shun the United States, ... 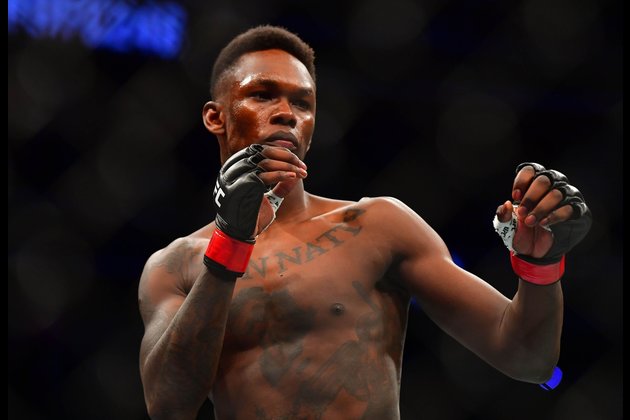 An intriguing pair of title fights top the bill at UFC 253. The main event of Saturday night's pay-per-view card, ...