US, Turkey reach agreement for ceasefire in Syria conflict 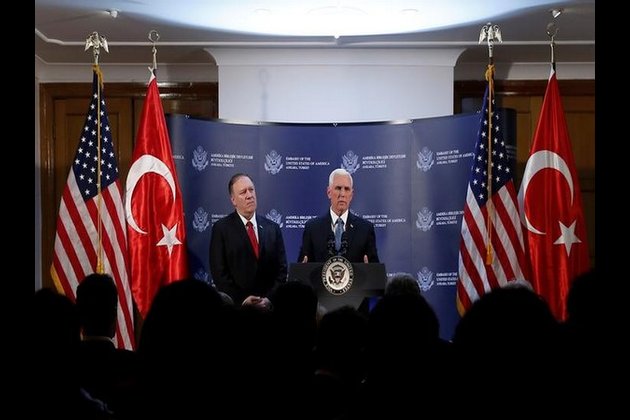 Washington D.C. [USA], Oct 18 (ANI): The United States on Thursday (local time) reached a deal with Turkey to suspend its military offensive in northern Syria within 120 hours to allow Kurdish forces to withdraw from the affected areas towards the safe zone.

It marked the first major meeting between the two countries since President Trump pulled US armed forces out of northern Syria. The pullback is widely seen as giving Erdogan room to act on his long-held goal of attacking the Kurds who fought for and with the US against ISIS.

Speaking of the agreement between the US and Turkey, Pence said, "It will be a pause in military operations for 120 hours while the United States facilitates the withdrawal of YPG from the affected areas in the safe zone, and once that is completed, Turkey has agreed to a permanent ceasefire, and the United States of America will work with Turkey, will work with nations around the world to ensure that peace and stability is the order of the day in this safe zone on the border between Syria and Turkey.""We think this is an outcome that will greatly serve the interests the Kurdish population in Syria and greatly serve the interests of Turkey and create the kind of long-term buffer zone that will ensure peace and stability in the region," the Vice President told reporters at a news conference here.

Pence said the Turkish operation would end when Kurdish militia People's Protection Units (YPG), an ally of the US against the Islamic State, completes the withdrawal.

As part of the deal, Pence further announced that Washington will not impose any further sanctions on Ankara.

He said, "Part of our understanding is that with the implementation of the ceasefire, the United States will not impose any further sanctions on Turkey,"adding, "And once a permanent ceasefire is in effect, the President has agreed to withdraw the economic sanctions that were imposed this last Monday."Earlier this week, US President Donald Trump had warned to impose harsh sanctions on certain Turkish officials in retaliation to the ongoing offensive that has lead to the displacement of more than 2,75,000 people, according to reports by Xinhua news agency.

Pence further said that the US will not have any military deployed in the region but will continue to engage diplomatically, politically and, of course, in humanitarian aid to protect the lives of the people in the affected region.

A senior Turkish official affirmed CNN that the "terrorists" would withdraw from the "safe zone" within five days and that Turkey would enforce the area after that.

He was also quoted as saying that the "military operation has paid off."Erdogan is scheduled to meet with Russian President Vladimir Putin in Sochi around the time the ceasefire would go into effect.

Pence and Pompeo's visit to Ankara comes a day after Trump suggested that Washington has no stake in defending Kurds. (ANI)