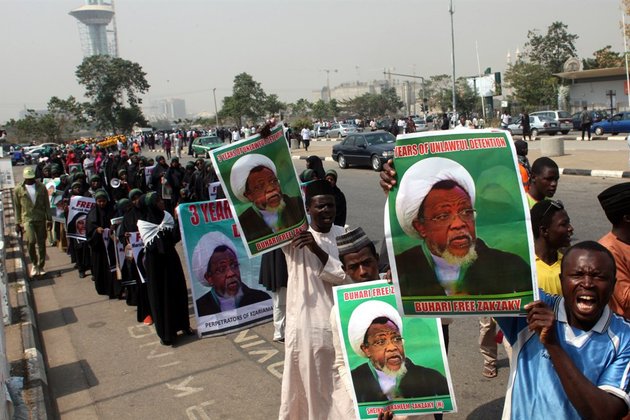 Detained Nigerian Shia leader Ibrahim el-Zakzaky and his wife have flown out of the country to get medical treatment in India, according to supporters and lawyers.

Held since 2015, el-Zakzaky, the leader of the Islamic Movement of Nigeria (IMN), was last week granted bail by a court in Kaduna state in order to seek treatment abroad.

He and his wife departed on Monday from Abuja's international airport for New Delhi on an Emirates flight, according to Harun Magashi, a member of the pair's legal team.

In recent weeks, IMN members had launched a series of demonstrations in the Nigerian capital to demand the release of their couple's from prison to receive medical treatment.

Several people were killed and more than 50 IMN members were arrested in clashes with police that also saw the killing of a journalist and a police officer, as well as the closure of the National Assembly building in Abuja.

"The health of Sheikh Zakzaky and his wife, Malama Zeenatudeen, is deteriorating. They are suffering from various health complications with gun injuries on their bodies since 2015," Mahdi Garba, a member of the Shia movement, told Al Jazeera.

El-Zakzaky and his wife had been held in a detention facility since December 2015, when security forces killed more than 300 of IMN members in a three-day operation in Zaria, according to human rights groups.

A court in 2016 said el-Zakzaky should be released but authorities refused and have since filed charges against him including homicide, unlawful assembly, disruption of public peace and other offences. He has pleaded not guilty to all charges.

Abdulhamid Bello, an IMN leader, told Al Jazeera on Tuesday afternoon that the movement's members were "overwhelmingly excited" about the trip to India.

"They're heading to New Delhi. Returning back to detention is a condition by the court but let us wait and see," Bello added.

After the Kaduna court last week ruled that the IMN leader be allowed to seek medical help, the Nigerian State Security Services immediately pledged to obey the ruling.

"Conformity with the order is in line with the Service's avowed commitment to the Rule of Law inherent in a democracy," spokesperson Peter Afunanya said in a statement.

"Consequently, the service is liaising with relevant stakeholders to ensure compliance."

GET THE NEWS at your fingertips and download the News24 app for Android here now. Get it for your iPhone here.