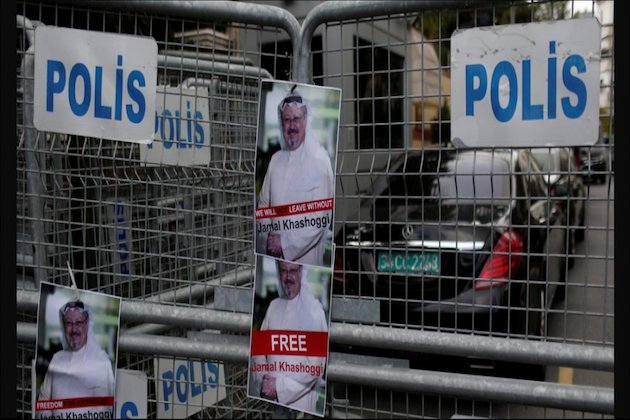 GENEVA, Switzerland - Saudi journalist Jamal Khashoggi was the victim of a premeditated extrajudicial execution, for which Saudi Arabia is responsible, according to a report published on Wednesday by the UN Special Rapporteur on extrajudicial, summary or arbitrary killings.

The report was angrily rejected by Saudi Arabia late Wednesday, with a Saudi official indicated the country may take legal action as a result of the report.

Following a six-month investigation, Agnes Callamard issued her findings into the killing last October of Mr Khashoggi at the Saudi consulate in Istanbul, analyzing evidence on the basis of international human rights law, and considering steps that could have prevented his murder.

"The circumstances of Mr Khashoggi's death have led to numerous theories and allegations, but none alters the responsibility of the Saudi Arabia State," the report released on Wednesday reads. "Saudi state agents, 15 of them, acted under cover of their official status and used state means to execute Mr. Khashoggi."

"His killing was the result of elaborate planning involving extensive coordination and significant human and financial resources. It was overseen, planned and endorsed by high-level officials. It was premeditated."

- the prohibition against arbitrary deprivation of life, a fundamental principle of international law;

- the prohibition against extraterritorial use of force as enshrined in the UN Charter;

- the requirement that states use consular missions for official purposes;

- the prohibition against torture, under the terms of the Convention Against Torture, ratified by Saudi Arabia, and;

- the prohibition against enforced disappearance, and;

- in killing a journalist, the State of Saudi Arabia committed an act inconsistent with a core tenet of the United Nations, the protection of freedom of expression.

"The killing of Mr Khashoggi thus constitutes an international crime over which other States should claim universal jurisdiction. I call on those States to take the necessary measures to establish their competence to exercise jurisdiction under international law over this crime of extrajudicial execution," Callamard said.

The Special Rapporteur also determined that there was credible evidence, warranting further investigation of high-level Saudi officials' individual liability, including that of the Crown Prince.

Following the execution of Mr Khashoggi, the report notes that Saudi Arabia took timid steps towards addressing its obligations, but that four more violations have taken place:

- the responsibility to investigate, effectively, transparently, and in good faith;

- the duty of international cooperation in investigation of unlawful death;

- the obligation of non-repetition.

Callamard called on the Human Rights Council, the Security Council or the UN Secretary-General to conduct an international follow-up criminal investigation for the purpose of determining individual liability and identifying options towards judicial accountability.

The report stated that it was troubling that to date the execution of Mr Khashoggi had been met with so few effective international responses, whether legal, political or diplomatic although a number of States had issued targeted sanctions against Saudi officials.

"These must continue. They are important but insufficient. The crime committed was a State killing. These particular sanctions against 17 or more individuals act as a smokescreen, diverting attention away from State responsibility," the report reads. "The current sanctions also fail to address the central questions of chain of command and of senior leadership's responsibilities for and associated with the execution."

The report also called on Saudi Arabia to release all individuals imprisoned for the peaceful expression of their opinion and belief; and to undertake an in-depth assessment of the actors, institutions and circumstances that made it possible for the execution of Mr Khashoggi.

The report also includes a range of recommendations addressed to Turkey and the United States, as well as to Member States generally and corporate actors. She further recommends the establishment of new mechanisms at UN level to strengthen the prevention and criminal investigation of targeted killings.

"The death of Jamal Khashoggi was an unfortunate and painful crime that cannot be condoned or tolerated by the perpetrators. The kingdom, as already announced, has begun to take the necessary measures to bring the perpetrators of this crime to justice according to the regulations in force in the kingdom after they exceeded all the applicable regulations and powers with their deed," the Saudi Minister of State for Foreign Affairs and Member of the Cabinet Adel Al-Jubeir said in a statement carried by the Saudi Press Agency on Wednesday.

"The report of Ms. Callamard has, regrettably, presented many unfounded accusations, including the violation of a number of international conventions, and is totally unacceptable to the leadership of the Kingdom," he said.

"Saudi Arabia, while affirming its deep commitment to and respect for international conventions and laws and its rejection of all the unjustified violations and allegations contained in the report, reserves the right to take legal action to respond to them."

On the impartiality of the report and its credibility, Al-Jubeir pointed out that the conclusions reached by the Special Rapporteur relied on press and media reports, as well as on analysis and conclusions of unnamed experts, as well as her use in the report of expressions, descriptions and allegations previously used by parties hostile to the kingdom for political, ideological and historical reasons.

The minister said that the Special Rapporteur ignored the efforts made by the authorities in the kingdom to investigate and bring to justice the perpetrators of the crime, which had already been announced. She should have referred to those efforts and that the ongoing investigations and judicial proceedings in this case in the Kingdom should be given full respect as they infringe on to the kingdom's sovereignty and its judicial institutions, which can never be tolerated, he said.

The Saudi official added that the report in an inapprehensible manner reduced the measures taken by the Kingdom to restructure the General Intelligence Presidency in the Kingdom, which was announced.

On the eligibility of the Special Rapporteur, the Minister of State for Foreign Affairs said, "The allegations and false allegations contained in the report are based on preconceived ideas and positions of Ms. Callamard regarding the kingdom. This is evidenced by her insistence since the first days of the incident to accuse the kingdom without any evidence as on the third day of the painful incident, she began to publish tweets accusing the kingdom of responsibility for the murder and of covering up the crime. She also described the statement of the Attorney General in the Kingdom as unacceptable and questioned the impartiality of the investigations, without regard to the code of conduct imposed on her by a professional and impartial evaluation of the facts. This raises an important question as to whether Ms. Callamard is qualified to submit an objective and impartial report on the case."

Minister Adel Al-Jubeir added that "based on the keenness of the Kingdom of Saudi Arabia to deal with this issue away from any political or media exploitation, or to negatively affect the ongoing trials in the kingdom and in continuation of its approach in cooperation with international human rights mechanisms in accordance with international norms, it provided the High Commissioner for Human Rights Ms. Michelle Bachelet Jeria with a detailed progress report on the case on 3 June 2019."